As the daughter of parents who grew up during the Great Depression and the granddaughter of nannies and poppies who had to toil and scrape for everything they got, I subconsciously absorbed an aversion to wasteful and frivolous purchases and a healthy amount of guilt for not valuing the things I did obtain.

That’s certainly not to say I didn’t (and don’t) indulge in materialism, especially as a teenager, or devalue the items my parents worked so hard to give me, but let’s just say I’ve never been comfortable with it. I don’t make purchases lightly, I’d rather have experiences than things, and I cringe at the idea of disposing of something that’s in relatively good condition when it could be repaired.

David and I waited ages to get smart phones when they first came on the scene. My flip phone worked perfectly fine, so why would I replace it with something new and shiny?

It took us ages to finally get one of those fancy schmancy flat-screen TVs that everyone had, and when we finally did, it was a modest 36″ version. Despite being devout film junkies (and very much appreciating good cinematography and art direction that only a high-quality screen can highlight), it was only very recently that we decided to upgrade that 13-year-old flat screen and indulge in a 65″ display that will enable us to really appreciate our favorite movies. Seven Samurai deserves better.

Just to give you context, generally speaking, I have to be at the point of pulling my hair out with frustration over obsolete technologies before I allow David to persuade me to upgrade to a faster laptop or a better network drive. (As much as David shares my aversion to unnecessary indulgences, he’s also much better at knowing when to stop suffering for naught.)

As is common knowledge, practically every year, Apple comes out with a new version of their iPhone, and every year David and I have the conversation about what this means for us. And every year, I revolt and protest and hem and haw at the built-in obsolescence of these devices. And every year I’m reminded that the bulk of my work is done on this amazing blasted thing — and that comfort and ease is not a bad thing.

And so I compromise. David gets a new version (his work is also technology-based), and I take his old phone. I donate my old phone, and I celebrate how much easier my life is to use a device that actually works.

And then it happened. The iPhone 10 came out, and my iPhone 6 (David’s old one) got slower and slower and slower, driving me madder and madder and madder. Oh, the pain of trying to photo-capture a beautiful moment when two of the deer outside our home are playing or head-butting or grooming — only to miss the shot because it takes literally 90 seconds for the camera app to open. Oh, the pain of the phone spontaneously shutting down in the middle of writing an important email.

Not to mention the fact that while foraging for greens to make a natural holiday wreathe, I inadvertently dropped my pruning shears on my phone and have thus been enduring a cracked screen for a good part of a month.

And so, we had the conversation — again. And again and again. What to do about the iPhone 10. What to do about my awful phone. I bristled at the idea of getting a new one, but as David was tired of seeing me have an aneurism every time I tried to do a simple task, we decided that once again…he would get the new version and I would get his nascent one-year-old iPhone 7.

But while being deliberate about making a new purchase, as we’re wont to do, we embarked upon (or rather, I embarked us both upon) this quest to be more mindful about how we live and what we purchase. Zero waste and all that.

Our delay came with many boons and benefits.

During our contemplation, it came to pass that Apple was getting so much flack for the short lives of their batteries that they decided to substantially discount the cost of replacing them. We also did our annual budget, and we realized that we had been paying for insurance with our cell phone service provider such that getting a cracked screen fixed would be a fraction of what it would normally cost.

And so here we are. 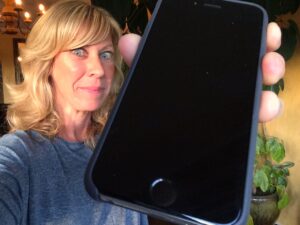 And this brings me back to what had been instilled in me long before there was a thing called Zero-Waste: that when things are broken, you fix them. That there is value in the things you work for. That seamstresses and cobblers and TV repairmen and tinkers are the original Zero Waste Heroes. Zeroes? (Hmm…I’ll work on that.)

I was taught this when I was young. I aspire to it as an adult.

And I’m grateful Apple has figured it out.

Before there was a thing called “zero-waste living,” there was the idea that when things break, you fix them. That there’s value in the things you work for. That seamstresses and cobblers and TV repairmen and tinkers are the original Zero Waste Heroes.

Giving the Bird to this Inauguration

FOR IMMEDIATE RELEASE GIVING THE BIRD TO THIS INAUGURATION As January 20th approaches, not everyone is talking about the inauguration of the 45th …
Listen Now

Visiting My Animal Hero in Rwanda!

My first animal-protection hero was Dian Fossey after I read Gorillas in the Mist in the early 90’s. I was in awe of her boldness and bravery, ded…
Listen Now

Check out some of these vegan treats that will heat up your Valentine’s Day. Watch the segment.
Listen Now