From Consumer to Owner: A Zero Waste Mindset

The changes I recently made to incorporate more zero-waste actions into my life have resulted in a change in my perspective. Listen to my NPR commentary about how we can have a zero-waste mindset while reducing our environmental footprint. Listen below, on KQED’s website, read the transcript below, and please share with friends and family. It’s a perspective that can change the way we interact with the world.

I’m An Animal Advocate. And I Have Hope.

I’ve been an animal advocate for more than 25 years, and I see enough cruelty every day to have a pretty bleak view of the world: And yet, I have hope.  No, I’m not a mythical creature. No, I’m not delusional, and yes, I’m paying attention. So much so that I’m quite aware, for instance, that in the U.S. every year, over 9 billion animals are brought into this world only to be killed for human consumption. Elephants are killed in their homes for their tusks. And wild animals face the consequences of global warming.

And yet, I have hope. I have hope because…well, you’ll just have to listen!

In any case, please share. I think animal advocates and vegans need to hear this message more than ever.

(Supporters make this work possible, and you get lots of perks besides! 🙂 Become a monthly supporter today. Thank you.)

Animals Are Residents — Not Intruders

The animals who live among us are residents — not intruders; listen to my NPR commentary about how we can be better neighbors to our wild brethren. Listen below or on KQED’s website, read the transcript below, and please share with friends and family. It’s a perspective that can change the way we interact with the world.

How to Talk to Hunters (or anyone with whom you disagree)

Posted in Food For Thought Podcast.

WARNING: Radical ideas fill this episode — the most popular of Food for Thought episodes — centering around the suggestion that we try to have compassion for people with whom we disagree or who participate in behavior we find abhorrent. That’s the thing about compassion: it’s gotta be equal opportunity or it’s just inauthentic. It’s easy to be compassionate towards like-minded people; the challenge is choosing to have compassion towards those with whom we disagree. Check out this episode for tips and suggestions on communicating with compassion – but only if you want to create change in the world.

Last night, I arrived home with three dear friends who helped me host a day-long animal advocacy conference in Oakland. It was an incredible if not exhausting day, and we had only 20 minutes to rest before needing to head out to treat the staff and speakers to dinner.

Three of us went into the house, and my friend Amanda came in a couple minutes after us — distraught. Our little deer Pious was lying in the corner of the house just at the base of our front stairs by the door. He was dying, and I hadn’t seen. This little guy who was born in April suffered an awful injury in early June that I’ve spared you all from seeing. It was very difficult to bear witness, and it was even more difficult that (after consulting with several wildlife rehabbers) he was past the age where fawns can be taken and treated. A few weeks old, yes. Over a couple months old, too difficult for a number of reasons.

And so I appointed myself his guardian, providing him with — as always — a quiet place, a lot of water, a salt lick — and monitored him to see if there ever came a time where I COULD intervene to ease him of any unnecessary suffering.

Last night was that night. We sent some of our group off to our dinner to meet with the rest of our party, and I immediately began making calls. I’m so grateful to the non-emergency dispatcher who, when told of the situation, voiced her compassion and concern. She sent out a call to Animal Control, and within an hour, he came out to relieve Pious of his suffering.

I feel so grateful that Pious chose to die in a location visible enough for us to see him so we could help. Yes, I realize that free-born animals die all the time and “it’s part of nature,” but I believe where and when we can appropriately intervene, we should. As humans, we impose our lives on animals in every way and intervene in ways that negatively affect them all the time, so I have no compunction about what some would consider “interfering” with nature when it alleviates unnecessary pain.

I am so grateful the animal control officer who came out hasn’t yet suffered from “compassion fatigue” as so many do in his profession. He was gracious and kind as he tranquilized Pious and brought him back to animal control to give him the gift of a painless end. I’m sad, but I’m so relieved that this little guy doesn’t have to struggle anymore. He was such a fighter these last two months, and he worked hard to keep up with his mother and brother, even after his lower limb atrophied and fell off. It was very difficult to watch, but in bearing witness, I was able to help indirectly — if not directly in the end.

The animals we live among are our fellow residents. And today I just want to honor one we have lost. He has a name, and he will be remembered.

This morning, I’m leading a walking tour from Jack London Square to Lake Merritt of the history of animal protection in Oakland in the last century. Many before me have borne witness to suffering and intervened (and continue to intervene) to help our local animal residents as well as those beyond our borders. And when I come home, I’ll make sure the water is fresh and the salt lick is in place for all who share our neighborhood.

(I’m including a photo of Remus and Romulus, two fawns born just a month after Pious, who are absolutely adorable and grace us with their playful, curious presence every day. I have only videos of Pious, and they’re too difficult for most people to watch. He was beautiful.)

Many thanks to Lila at Yggdrasil Urban Wildlife Rescue Center (YUWR) and Wildcare Bay Area who help injured and sick wildlife and guided me the last two months through Pious’ ordeal.

Many thanks to the kind Animal Control officer who supported Pious through his transition.

Compassion for All Creatures Great and Small: In Conversation with Nancy Lawson, author of The Humane Gardener

Posted in Food For Thought Podcast.

Just because you don’t consider yourself a “gardener” doesn’t mean this episode isn’t for you. Humane gardening is about looking through the lens of the millions of species on this planet and creating a space that enables them to thrive. It’s about coexisting with rather than managing or controlling wildlife. With the help of Nancy Lawson, author of The Humane Gardener: Nurturing a Backyard Habitat for Wildlife, you can apply this concept in your own garden patch, on your apartment balcony, or as part of policy you create with city officials. In this episode, Nancy and I chat about: 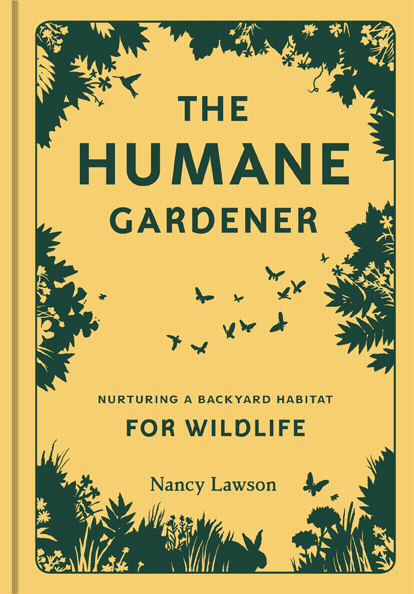 Thank you to supporters for making this podcast possible.

Animal Characteristics in Word Histories: Who They Are in What We Say

Whereas the word veal in English simply means “flesh of a calf” and pork in English means “flesh of a pig used as food,” hidden in many of the Anglo-Saxon/Old English and Proto-Indo-European words for the living animals are clues about the physical, behavioral, or vocal characteristics of the living animals, reflecting a tendency to name animals based on typical attributes or activities.

Roughly 10,000 new words entered the English language during the Norman occupation and assimilation, particularly those having to do with the world of the ruling class. The effects of the linguistic class division are most apparent in the culinary realm, where words used by the aristocracy have French origins and words used by the commoners have Germanic origins. This is evident even today in the way we talk about certain animals, particularly those typically eaten by Westerners, with words rooted in Anglo-Saxon / Old English to indicate the living animals and words rooted in Old French to indicate the slaughtered animal as flesh for consumption.

Supporters receive the written transcript of each episode.