How the Pandemic Has Made Mourning So Hard

My mother died in a nursing home 3,000 miles from me with a nurse but no family by her side. She was declining by the time the Covid-19 pandemic halted us in our tracks and made it impossible for me to fly from California to New Jersey to be with her in her final days.

Grieving is hard. Grieving the death of a parent even harder. Grieving without the usual end-of-life rites and rituals has been impossible.

In my past experiences with death, I learned that aspects of the dying process made the mourning process a little easier — less disorienting, less chaotic. Keeping vigil, sharing memories, watching, waiting, and witnessing all provided an anchor for the grief that was to come. I knew where to go next because I knew where I had been, but not so with the death of my mother.

Getting a phone call in the dead of night is not the same as being able to see her, touch her, say goodbye, watch her go. Calling her friends and family to share the sad news is no substitute for gathering to reminisce and memorialize her life. Walking out my front door and stumbling upon the box that contained her ashes was a blow — not a consolation.

The lack of closure has left a fissure that I’ve come to realize can only be filled with some familiar rites of passage — delayed and altered though they may be. I told a friend that — jarring though it can be to see the notice pop up on my phone — I still haven’t been able to delete the calendar reminder for the weekly video calls I once had with my mother and her nurse’s aide. My friend suggested I keep it for now and create a new weekly ritual of memory and meaning.

And so I have. And so it helps — as did writing her obituary and creating a memorial photo album. But there is more to do.

Before she fell ill, my mother and I talked about what she wanted me to do with her ashes once she was cremated. Ever practical, she argued that she’d be gone and wouldn’t know the difference, so whatever was meaningful for me — the living — should take precedence.

Prior to my mother’s death, my husband and I had already begun making our own final plans, and after much thought and many conversations, we decided on a grave in Oakland’s historic Mountain View Cemetery — a special place we frequented before the pandemic closed it to the public. My mother’s death accelerated our contemplation and finalized our decision. The process has been a long one, but it’s already bringing some much-needed closure. 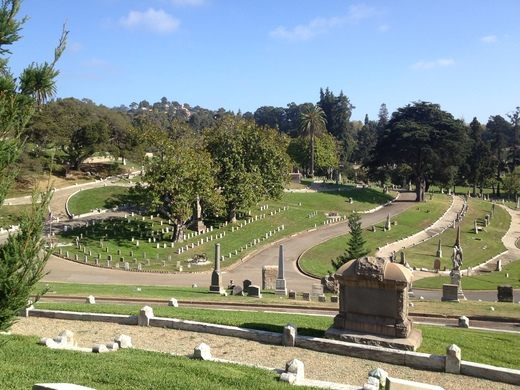 While my mother didn’t have much to say about where her ashes would eternally reside, she did have some very specific thoughts about her memorial service: she wanted there to be photos and stories, laughter and music, and she wanted a bagpiper to play — among other songs — Danny Boy. Some friends have vowed to join us for the interment — safely distanced and responsibly masked — and never before have I been so eager to fulfill a wish.

With her subsequent service and burial, I’m not looking to “get over” my mother’s death as I am looking to “get over” on the other side of the chasm that has been looming for months. It turns out that we humans — and even some non-humans — create death rites and rituals for a reason — to comfort the living and usher us through the grief process. Without that bridge, mourning just feels like an unhealed wound or an unfallen shoe.