I first heard about Pela’s compostable, biodegradable, non-plastic, non-toxic phone cases from my friend Kathryn Kellogg over at Going Zero Waste, and I didn’t waste anytime ordering one. (I have an iPhone, but Pela makes phones for Google and Samsung phones, as well.)

For me, choosing ecologically friendly, animal-friendly products is always top of mind when I’m making purchases, but I also want them to do the job they’re designed for.

I’ve had the Pela case for more than two years now and can attest to its efficacy — it has absolutely protected my phone, which I’ve dropped MANY times and use constantly each and every day. But a little more than two years in, it’s time for another, as the wear and tear is beyond cosmetic. 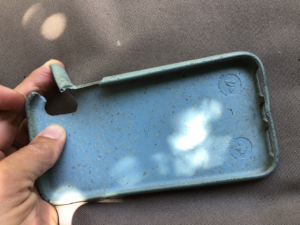 Zero waste is about making choices based on responsibility and value, and while two years doesn’t seem like a terribly long time to own a phone case, there are a few other things to consider:

So, in all ways, they come out on top, and two years later, I’m ready to compost my case.

While we are lucky to have a municipal / industrial compost system in our city of Oakland, CA, I’m going to add my old case to one of my backyard compost bins to see how long it will take for it to break down. According to Pela, it could take between 6 months and 2 years, so I’ll report back!

Two years after my initial purchase, Pela has increased their line in terms of colors, and some also have designs created by artists Pela commissions to beautify their products. They also have other biodegradable accessories, including  phone grips, which perhaps I should buy considering how often I drop my phone. Again…klutz.

Pela is offering a special right now that gives you two cases for the price of one — the intention being that people need to wash their cases more than ever to avoid spreading Covid-19. I took advantage of this offer and picked two pretty cases, which arrived in compostable non-plastic packaging!

As with being vegan, aspiring to zero waste isn’t about being perfect; it’s about doing the best we can. It’s also not about buying more stuff — including everything marketed as “zero waste,” but when it comes to prolonging the life of necessities — and yes, my phone is a work and life necessity right now — then I’m grateful for companies like Pela who is providing an option that is ethical for human and non-humans alike.

I’m no “survivalist,” but I do know how to whip up a number of staples from scratch, and for that I am grateful.

Tortillas are something I make from scratch fairly regularly since becoming zero waste, but mostly corn tortillas made from masa flour. However, at my recent visit to the Food Mill for my dried bulk pantry items (beans, grains, flour, sunflower seeds — for the squirrels!), I forgot to get masa.

We make a LOT of beans in our house, and after making a beautiful pressure-cooker pot of chipotle pinto beans, I was jonesing to pair them with tortillas.

No masa? No problem.

It was time to perfect my flour tortilla skills, and I think I nailed it.

Yes, you can freeze these beauties in a sealed package, but I think you’ll find you’ll eat them up before you have a chance!

ENJOY, and let me know what you think! (Also, don’t forget to check out the Quick and Easy Meals recipes for my famous No Queso Quesadillas. Now you can do so with these homemade tortillas!